Although Golang (Go) and C are syntactically identical, Go adds memory safety, garbage collection, structural typing, and concurrency in the CSP style. Let's analyze some of the factors that make Golang so popular in the industry. 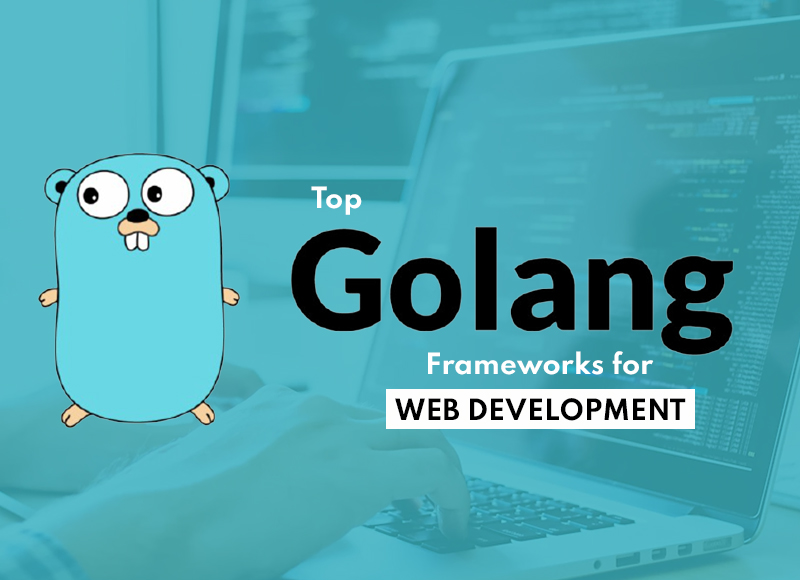 With hundreds of different programming languages available in the market today, it can sometimes be difficult for developers to know which one will stay relevant in the next 5 or 10 years.

Though a little late to the party, Go programming language, or Golang, is making headlines in the software & web development world. The speed, simplicity, reliability, and some of the best frameworks make Golang a perfect choice for all sorts of website & software development initiatives.

You may ask, what are some of the top Golang frameworks for software and web development? Well, that’s exactly what we are going to cover today. But before that, let’s try and learn what Golang is and why it is considered one of the best programming languages in 2022.

Golang was developed by the tech giant Google in 2007 as an alternative to C+ and Java and was released to the public in 2012. Since the release, Golang’s popularity has seen massive growth in the developers’ den. It delivers high performance and is easy to learn compared to some of its peers, and booming tech giants like Facebook, Netflix, Twitter, Uber, & Dropbox have also given it a nod of approval.

Why is Go one of the best Programming Languages?

For many new developers, Golang is their first experience with a statically typed programming language. The fact that the basics of Go can be learned in just one sitting also makes it a developer’s favorite.

But one sitting alone will not make you master Go programmer. It would require a sound understanding of the standard library, best coding practices, and other project-specific areas, but as far as fundamentals are concerned, they can be mastered in just a day.

Some teachers claim that even students with no proper programming background can learn to code a simple HTTP server or a command-line application in just a few hours.

Go programming language has a rather minimalist approach and that comes in quite handy when it comes to making a developer’s life easy. The core language consists of some orthogonal features that can be combined in several ways. This makes it easier to learn the language and to read & write the programs.

There are no generics, templates, or separate runtime libraries. Golang can deliver a single executable code that can be copied without breaking dependencies. Since Go is compiled into a machine code, it also provides exciting speeds and easily outperforms programming languages that require interpretation or virtual run times. Thus making it fast to learn, write, compile, and execute.

For those just getting to know Golang,  you might be familiar with packages if you have a Java background. What is a package in a programming language?

In basic terminology, it is simply a directory in the program to store source files, dependencies, or even other packages. Packages allow developers to separate codes properly and manage dependencies efficiently as well.

The package system is perhaps the most well-architected feature of the language and also one of the most underrated benefits of Golang.

Most programming languages cannot keep up with hardware as it becomes more advanced & sophisticated. Today's hardware calls for a language that can handle concurrency and support scalability if the database outgrows the infrastructure.

Go was created in an era when multi-core systems were gaining popularity. So the particular focus was placed on supporting concurrency. It is kind of like Elixirlang in this regard. This feature allows the management of multiple tasks simultaneously in a system called Communicating Sequential Process or CSP.

You might be familiar with "Analysis Paralysis" as a JavaScript developer. It refers to the pain programmers go through when trying to pick a testing framework before realizing (halfway through) that 70% of the chosen framework is not being used. This issue presents itself again when a need for reliable profiling arises.

The Golang web framework has a built-in testing framework to tackle this pain point. This tool provides developers and QA testers with the most uncomplicated APIs & minimal assumptions and can be used for different kinds of testing & profiling. It also has advanced testing features such as parallel testing and skip configuration.

According to some recent studies, Golang development skills are among the world's highest-paid skills. Go's future looks bright, too, with a projected growth rate of close to 50% over the next couple of years.

Go's popularity is constantly increasing and many tech companies around the globe prefer it over other mainstream programming languages. Besides the 5 benefits of Golang mentioned above and the fact that it pays well, developers also like using it because of the availability of some of the best Golang web frameworks such as Buffalo and Mango. But those aren't the only ones. So let's look at some of the most used and recommended Go frameworks.

Most web development frameworks today have one aspect in common, i.e., Model View Controller or MVC. Beego, however, stands out from the crowd. It utilizes an Object Relationship Map (ORM) model to manage data. Beego is also quite similar to the trendy Django framework.

It is one of the most popular Golang web frameworks and assists developers in figuring out scalable routing options fast. With it, programmers can integrate multiple routings without compromising on extra functionality.

New and accomplished developers looking to boost API performance should opt for the Gocraft framework when creating a digital solution. And as discussed earlier, combined with Golang, this framework also helps in typing app code statically.

This PEP 333 & Rack-inspired Golang web framework is a developer's favorite and is considered the best in the market. However, where it lacks regular maintenance and updates, it makes up for that through its USP i.e.; modularity.

Moreover, Mango allows developers to build reusable components of HTTP functions swiftly and has a slew of libraries to aid the development process.

Used by many, it is Google's most helpful creation. With it, developers can use the NET/HTTP library's reusable components and implement the same code for creating software as often as required.

Another reason why Gorilla is considered one of the top Go frameworks is that it utilizes robust web sockets. As a result, it enables software creators to deploy the codes appropriately and without wasting time.

Revel tops the charts regarding being highly API-friendly, and it is probably one of the most easy-to-work-with Golang frameworks. Revel eliminates the need for constantly copying and pasting codes and makes a developer's life a tad easier. It is made possible because Revel comes with an array of valuable modules & Components.

It is one of the simplest and easiest frameworks to work within web and app development.

This Golang web framework has recently become popular. One of its qualities is that it allows web and app development companies to create projects fast. Another benefit of Golang's Buffalo framework is that developers can easily retrieve binary files with a dev command.

Buffalo is notably fast compared to fellow Golang web frameworks and gels in with the ecosystem remarkably well. Thus paving the way for a rather holistic web development process.

Another top-of-the-line Golang web offering is Goji. It is not just a framework but a complete & elastic request multiplexer for the Go programming language. The Net/HTTP.ServeMux is Goji's primary source of inspiration, and it comes loaded with all the respective features and functions.

Goji ensures that all the requests the developers receive pass through it before placing them following the registered patterns. Goji is also fully compatible with Einhorn & HTTP.

No, it’s not your favorite celebration drink but it does put smiles on the developers’ faces by providing them an easy-to-work-with and complete ecosystem for Golang. Be it the compatibility with third-party support or flexibility in its workings, Martini takes care of the loads and processes as it is big deal.

A major benefit of implementing the Golang + Martini strategy is more security & scalability. This is made possible by some crucial & important framework features such as routing and dealing with exceptions. Making Martini a favorite in the developers’ den.

What differentiates GIn from the other top Golang web frameworks is its minimalistic framework design and easy-to-comprehend syntax. While it is inspired by Martini, it performs way better in the speed department, thanks to special emphasis on its library.

An added advantage is that it is very user-friendly and makes code modification quite simple too.

Web. go allows developers to implement appropriate tree routing protocols. However, most programmers prefer using it with Golang because they find it easy to work with when developing a routing protocol with conditional relationships.

It is the go-to choice for developers when dealing with projects packed with routing protocols.

It's the developers' favorite tool for creating exceptional XMPP servers. Most of Golang's email functionality is also dependent on the NET/HTTP framework. Its middleware aspect also proves to be quite beneficial during web development.

It also has an active community of developers you can connect with if you need assistance or guidance.

Have you worked with Golang web frameworks? Why do you think it is not as popular as Angular, React, or Python, even though it has many advantages?