IDE or Integrated Development Environment refers to the toolset or package of solutions that mobile app developers use for building an app, maintaining a faster development cycle while keeping all standard practices. 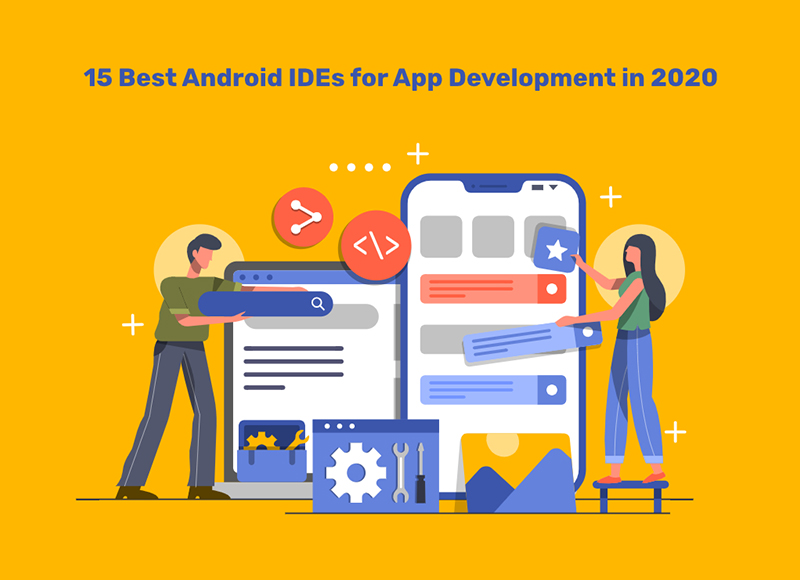 Over the last few years, Android has been considered the best mobile operating system because of so many factors like its cost-effectiveness, better customization, diversity in phone options, easy app development, and many more. If you purely look at statistics, then also android is a winner among all smartphones with a global market share of 86.1% in 2019. And with this considerable rise in the android app’s popularity, the demand for Android IDEs for app creation is also significantly high.

IDE or Integrated Development Environment refers to the toolset or package of solutions that mobile app developers use for building an app, maintaining a faster development cycle while keeping all standard practices. An IDE takes care of all tasks in the development cycle ranging from app design, coding, code compiling, testing, and debugging.

For Android app developers, there are several credible and acclaimed IDEs in the market. Here we have picked the top android development IDEs preferred by most app developers around the world.

Xamarin built by Microsoft and launched in 2011, emerged as one of the most popular Integrated Development Environment for both iOS and Android developers. The IDE is geared for enterprise app projects and allows building cross-platform apps. With this IDE, Android developers can use the Microsoft Visual Studio toolset for their projects. The Visual Studio is the perfect tool for managing versions, managing projects, and development teams and building services.

Unreal Engine is the ideal android IDE that offers a comprehensive toolset for building apps with real-time features. For building Android apps across niches such as immersive game applications for consoles, PCs, mobiles, and VR and AR apps, this is the ideal IDE. Using this toolset, the Android developers can build an immersive experience for diverse app niches, including automotive, photorealistic applications, architecture, and real estate, and other niches.

PhoneGap is a globally popular IDE for android which is also used widely for cross-platform mobile app projects. This IDE allows the developers to use the same code for multiple projects across platforms. The reusability of the code is the key strength of this IDE. PhoneGap is also widely known for faster debugging and quick development cycles. It utilizes the standard web technologies such as HTML, CSS, and JavaScript for developing apps across iOS, Android, and Windows without requiring the developers to handle the native SDKs of these platforms.

This is one of the most sophisticated Android IDEs that comes with a very clean and richly layered UI. The IntelliJ IDEA is widely known for building both feature-rich websites and mobile apps by using a variety of languages such as Java, Kotlin, Scala, Groovy, and various other frameworks for Android app projects. Thanks to very detailed documentation, the IDE can be easily integrated into any project.

Corona is a fully-fledged framework and toolset for cross-platform app development projects. Corona allows using single codebase for building apps for multiple platforms and devices, including iOS, Android, and even smart TV and wearable platforms. This android IDE comes with an efficient simulator that is capable of reflecting code changes immediately to show the app user experience in all target devices. Automatic compiling at build time is another great advantage of this framework.

AIDE is an app that can be used by developers as an IDE in any Android project. This tool helps to build an Android app directly on any Android mobile device. It is also highly popular for compiling java code with Android and C++ projects. The IDE comes with a free version and a fully-featured premium version. The free version offers almost all the elementary features to build an Android app quickly on your Android device.

DroidScript is another popular Android development IDE known for enhanced productivity and faster development pace compared to most other development IDEs and tools. Since using this IDE doesn’t require any internet access, you can just use it anywhere for development. The tool is ideal for new developers as it offers a whole array of tutorials.

Unity 3D is the widely popular game engine for building sophisticated game apps for different OS platforms. This multipurpose game engine can be used to develop games with both 2D and 3D graphics. This android development IDE makes android game development easier with drag-and-drop functions. Unity 3D is ideal for game app projects needing high quality visual and audio output. Since all different game elements and variables can be seen during gaming, it allows easy debugging of the game app during runtime only. The code editor of the Engine only supports C# and JavaScript language.

Basic4Android is mostly used for rapid development projects. It is a paid software that is used by Android developers that needs faster development with access to every kind of tool. The IDE can help in building a wide variety of Android apps across the niches.

B4A communicates with native Android API by using Java libraries. The libraries of this IDE come loaded with two different files, respectively, Java jar file and the XML file. Apart from its own libraries, any user can share their Java written libraries with the B4A platform.

This android development tool/IDE clearly displays its leaning towards web technologies through its name. It is basically a multipurpose solution for building different web apps and mobile apps by utilizing the code written in PHP, CSS, JavaScript, HTML, and JSON. The IDE comes with an inbuilt feature for detecting coding errors and code optimization. Apart from this, the IDE offers support for regular extensions and Git integration.

AWD toolset also helps in editing code by using web technologies such as FTP, FTPS, SFTP, and WebDAV. Though it is basically a web development toolkit, it is a multipurpose rich IDE that can be used for Android app projects.

This is another popular mobile IDE for android enriched with key features to build applications of different types and niches.DeuterIDE also allows building Android apps in 40 different languages. Another great attribute of this IDE is that it is extremely lightweight in spite of offering heavy coding concepts in diverse languages. The IDE also uses a virtual keyboard for incorporating highlighted syntax, symbols. Indentation, etc.

Eclipse is another widely known and popular IDE for Android projects. It is an open-source and completely free toolset. Covered under the Eclipse Public License, the IDE enjoys the support of a large community of developers. It is also a versatile toolset with a plethora of plugins and different configurations. The IDE allows a wide range of customizations. It supports XML language and Java for scripting.

CppDroid is a unique IDE that offers different coding instances to help developers understand the contexts and development scenarios. The IDE in recent years has become popular with positive reviews from developers all around. It offers code completion and custom configuration capabilities. The IDE also provides an instant diagnostic feature to help developers detect security glitches and bugs in code.

To make things easier for the new developers, CppDroid IDE provides a plethora of tutorials, examples, and sample code. The toolset also offers inbuilt support of Google Drive that allows keeping data and managing storage even in offline mode.

Arduino is a Java-based open-source and free android IDE that offers a lot of popular features required across app development projects. Some of the key features and inbuilt capabilities this toolset comes loaded with include code compiling and editing, debugging, and others.

The toolset perfectly fits into projects for a variety of operating systems, including obviously the Android OS. Arduino is one of the few IDEs that less experienced, and newbie developers like for their first Android projects. But it is equally recommended for complex and cross-platform app projects.

Titanium is another powerful open source and free android IDE by platform Appcelerator that allows developers to create native and cross-platform mobile applications from a single JavaScript codebase. Titanium API will compile your javascript code to create a competent native app with full offline support for mobile platforms like iOS, Android, and Windows. This is definitely the biggest advantage. This toolkit allows you to deliver a seamless user experience within a fraction of the time. Apart from the free plan under the Apache 2.0 License, the tool also has enterprise pricing plans to provide augmented support for analytics and testing.

Since Android apps are now more popular than their iOS counterparts, at least in terms of usage, popularity, and market presence, most businesses prefer building their apps for Android operating systems first. Naturally, expert Android app developers and are experiencing never-before demands. For faster development and optimum output, sophisticated and acclaimed tools and IDEs are also experiencing high demand. This is why choosing the right toolset for your Android project is extremely important. Hopefully, the above description will help you find the right tool for your next Android project.