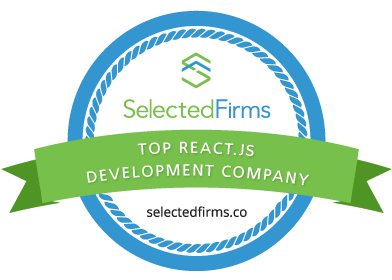 As a leading React.js development companies, they comprise proficiency in delivering the most complex and challenging React JS Development services. React.js developers are highly knowledgeable and experienced in implementing new technologies and transforming them into business-driven solutions. They provide committed and cost-effective ReactJS developer hire services. For on-time project delivery, React.js development agencies use the most advanced tools and techniques, as well as development approaches, to ensure that you get the best performance and inventive solution for your money. ReactJS is used by these firms to create sophisticated interactive applications such as SPAs, PWAs, dynamic web pages, social media apps, and more. Custom ReactJS Web Development, Interactive UI Development, Web Application Development, and Maintenance and Support are some of our experienced ReactJS development services. The top React.js Development companies are ranked by experts. Rates, skills, and verified customer reviews will help you choose the best React.js Development firms for your project.

We help you get quality leads!

How We Assist Our Customers Many companies squander a tonne of resources on unsuccessful marketing, including time and money. Digital marketing services from Joshua Lyons Marketing produce high-caliber, quantifiable outcomes. Our clients see an increase in both leads and sales as a result. Search engine optimization (SEO), website development, website design, content writing, and marketing consultation are among the main services provided by Joshua Lyons Marketing. Additionally, we provide assistance to companies of all sizes with website hosting, graphic design, Google Ads, and email marketing.

What is ReactJs Development? How does it work?

React is an efficient, malleable and declarative library of JavaScript which is used for constructing user interfaces. ReactJS is an open-source front end library which is component based and is responsible for the application’s view layer. Its maintenance is done by Facebook.

React is not a framework, but a library constructed by Facebook for solving some of the problems they were facing in earlier stages.

React makes use of a model which is declarative and makes it smoother for reasoning about the application and aiming for both efficiency and flexibility. It is responsible for designing views which are simple for each state of the application. React will also update in an efficient way and extract the correct components when there is change in data. The view which is declarative makes the code more expectable and easy for debugging.

An application of React consists of many components, each of which is responsible for interpreting a minor HTML piece which is reusable. The components can be integrated with other components to allow building of complex applications out of building blocks.

Why should you opt for ReactJs development for your business app?

ReactJS helps web developers in coming up with application solutions which perform seamlessly with architecture and innovative virtualization. Aside from this, the developers as well as non-technical persons find the characteristics mentioned below, helpful in building or updating the business apps:

Why do React developers prefer Reactjs over react native?

There are many reasons why React developers prefer Reactjs over React native, and some of them are:

What are the key indications for hiring a ReactJs development agency?

When a company hires a dedicated ReactJS development agency, its web developers will use respective functions of the library for accelerating the development process and making it more precise.

The real-time changes that happen in an application, is due to ReactJS. React wishes to be both elastic and efficient in application reasoning by allowing the developer to design humble views for every state of the application. Which means that React will only update the component of the application when there are changes in the respective data. Its declarative standard makes the core more expectable and easier for debugging (that is error correction).

Thus, ReactJS is a component which is crucial for the process of application development. Along with the technical knowledge needed for creating a tempting UI using it, it becomes important to hire the developers from a ReactJS agency for this job. In this way one can make sure that the final outputs have a chance in meeting the expectations of performance.

What are the sources to find a professional React.js development agency or React.js Developer?

If a company requires a react developer for a particular project which is short term, they may look for hiring freelancers.

Even though the cost of freelancing developers of react native is relatively less, it is often the only benefit. It is rare to find React developer freelancers who can efficiently work and relate to the given project as they work on many projects simultaneously, and sometimes if things don’t go well they can also leave and shift their focus on others.

So if a company needs someone to handle the project with dedication, freelancing React developers can be a risky but fruitful choice. But finally, it all comes down to the company to decide.

There are many platforms to hire freelancers from and one of them is Upwork. It is trusted by many and has proven to be a good platform for freelancers. The platform has a huge number of developers, each with various levels of knowledge, expertise and rates of payment.

Homework to do before hiring a React JS development firm

Before hiring a React JS development firm, it is crucial to look at some of the properties to look for in the company’s developers beforehand:

For front-end development, Reactjs is a library. So the most fundamental skill that is needed for a Reactjs developer is HTML and CSS development. However, to hire someone who knows just surface level knowledge is not enough. Instead it is wise to hire developers that can develop interfaces which can allure and engage. This needs understanding of principles in depth.

It is important for Reactjs developers to be at ease with working with DOM virtually, JSX, and the life cycle of components to make the most out of this front end library which is very versatile.

There is a need for on-boarding of other developers for an application, so it is important that those Reactjs developers who write the codes originally make sure that there is clarity in code as well as cohesiveness.

Cost of hiring a Reactjs service company, how would hiring an expert reactjs development company affect your budget?

The cost of hiring a Reactjs service company would depend on the charging rates of their developers.

The charging rate of a ReactJS developer ranges from $15 to $150 on an hourly basis, while for the contracts which are on fixed price basis; the charges can vary and will depend on the scope and time period of the project.

While the ReactJS Development can offer a lot with high level Development of web applications, it is mostly supported by the experience of the ReactJS developers who can make use of these in an optimal way. Therefore, hiring good ReactJS developers from an agency with a noteworthy amount of experience is important for making the business application a huge success that blows the customer’s mind.

It is essential to choose a professional development company which suits the business rather than going for the best one available. Its role and requirement matters too in this aspect. The same can be said towards React JS companies.

With the rising popularity of frameworks of React JS, there is a huge demand for its expertise around different domains of businesses although nowadays it is very daunting to hire developers who are eligible.

Selected Firm helps in selecting top ReactJs service providers based on various parameters which can help in business’s growth.

Other Service Providers in Pace

Get In Touch With Agency